The number of food patents filed globally for meat substitute products rose by 34% in 2018, up 34% from 190 in 2017*, with vegan and health conscious trends driving innovation among major food companies.

The rise in the number of meat substitute patents reflects the surging popularity of alternative meat products as consumers become more conscious about the environment, animal welfare, and their health. Research shows 1,443 patents related to meat substitutes have been filed in the last 5 years.

Large food producer companies such as Nestle and Maple Foods, the Canadian protein company are moving into the alternative meat market as vegan and vegetarian products capture a greater share of the food market. Nestle, for example, recently launched a meat-free burger in April 2019.

Globally, sales of alternative meat substitutes such as plant-based burgers are estimate to reach an annual $140bn in a decade, gaining market share of 10 percent of the $1.4tn world meat market**. This perhaps explains why so many large businesses are looking to enter the alternative meat market.

Last month, California based Beyond Meat became the first plant-based food group to list on a leading exchange (Nasdaq). Beyond Meat’s Initial Public Offering raised $240.6m and the group’s shares almost doubled after listing, highlighting the potential investors are seeing in this sector***.

Alongside Beyond Meat’s successful IPO, Impossible Foods, the plant-based meat company, raised $300m in its latest funding round last month. The company has seen its value increase by two-thirds to $2bn in the last year alone.

Examples of meat substitute patents that have been filed in the last year include:

More and more large food companies are rushing to jump on the ‘clean eating’ bandwagon. However, high margins and patenting the technology can create major barriers of entry.

The vegan movement shows no sign of slowing down, so there is plenty of room for innovation in the meat substitute market – this is borne out by the soaring number of patents and the big names investing in the market.

Pioneer Hybrid International, the US seed producer, filed the most food patents related to meat substitutes through WIPO in 2018: 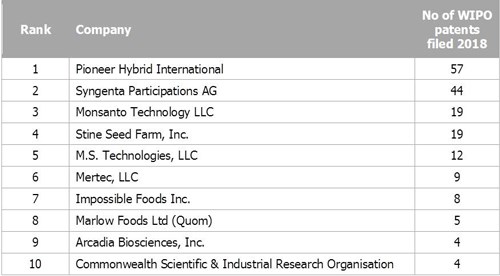